Acoustic installation with dialogs about talk and silence, spoken by Jan Josef Liefers and Anna Loos. 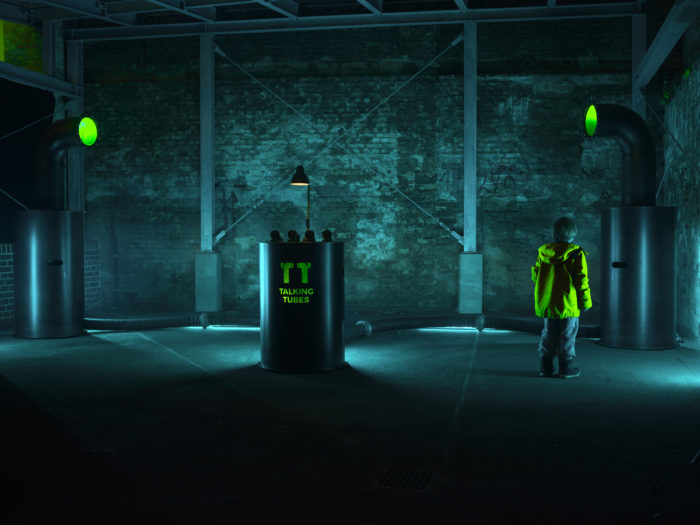 “Let’s talk! Even today, when everyone and everything are all communicating with each other, dialog still remains the fastest and simplest way to clarify things. It is the most important link between human relationships and thus the origin of all forms of communication. Celebrating this origin with an interactive installation is the idea behind Talking Tubes: Two tubes exchange ideas, alternating between the profound and the absurd, and formality is excluded. The spoken word takes precedence! The Talking Tubes are never finished, but remain in motion: the “talking” repeatedly with new performers and contents, the “tubes” with other surprising constructions.

Jean-Remy, born in 1952 in Brussels, is one of the founders of the creative agency Jung von Matt, the only agency in Germany that has repeatedly been lauded in Cannes as the best independent agency in the world. This agency has been the creator of many campaigns that have achieved cult status and is both an honorary member of the Art Directors Club as well as a member of the Hall of Fame of the Wirtschaftswoche magazine. After stepping away from the operational side of the business, Jean-Remy began working on conceptual art projects that had been long in the making. The Talking Tubes project is his first to be presented to the public.

An installation made of metal, industrial waste and fire hoses with a lighting concept made of washing drums and pitchforks, 7 m wide, 2.50 m high, 420 kg.