The MKM presents a concentrated, intensive comprehensive show of Günther Uecker. Different subjects will be shown in diverse thematic rooms – from the early works to nailed objects and sand images to the time spirals. Inside the lucid exhibition rooms of the MKM the works are displaying an especially intense effect.

„The essential is not yet done…“ Günther Ueckers words are showing once more the vitality and unbowed creative urge of the artist who strongly influences the German and international art scenes for a long time. The well-known nail which he transformed into a metaphysical object and which has become a kind of hallmark is just one aspect of his extensive work. Nail, knife, hammer as well as sand, stones or characters are his means of expression which pick out the „endangerment of man by man“ as a central theme.

This basic thought of his work arises from his sensitive perception of martial occurences all over the world. Thus he understands his artworks as „ciphers, as a language to share my feelings“. At the same time Günther Uecker creates them as „love letters“ to the interested vis-à-vis. Art offers a possibility to him to build up a feeling of being closer to other people. The artist deals intensively with foreign cultures and religions. A candid, open-minded interest in the world is leading his future plans as well: “I want to get involved even more with the things that are astonishing me.” 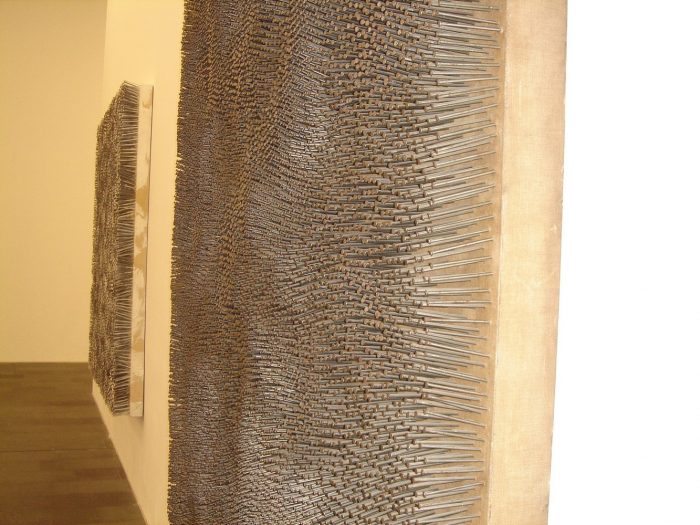 Seite zurück
Between Silence and Strength | Sculpture by Dietrich Klinge